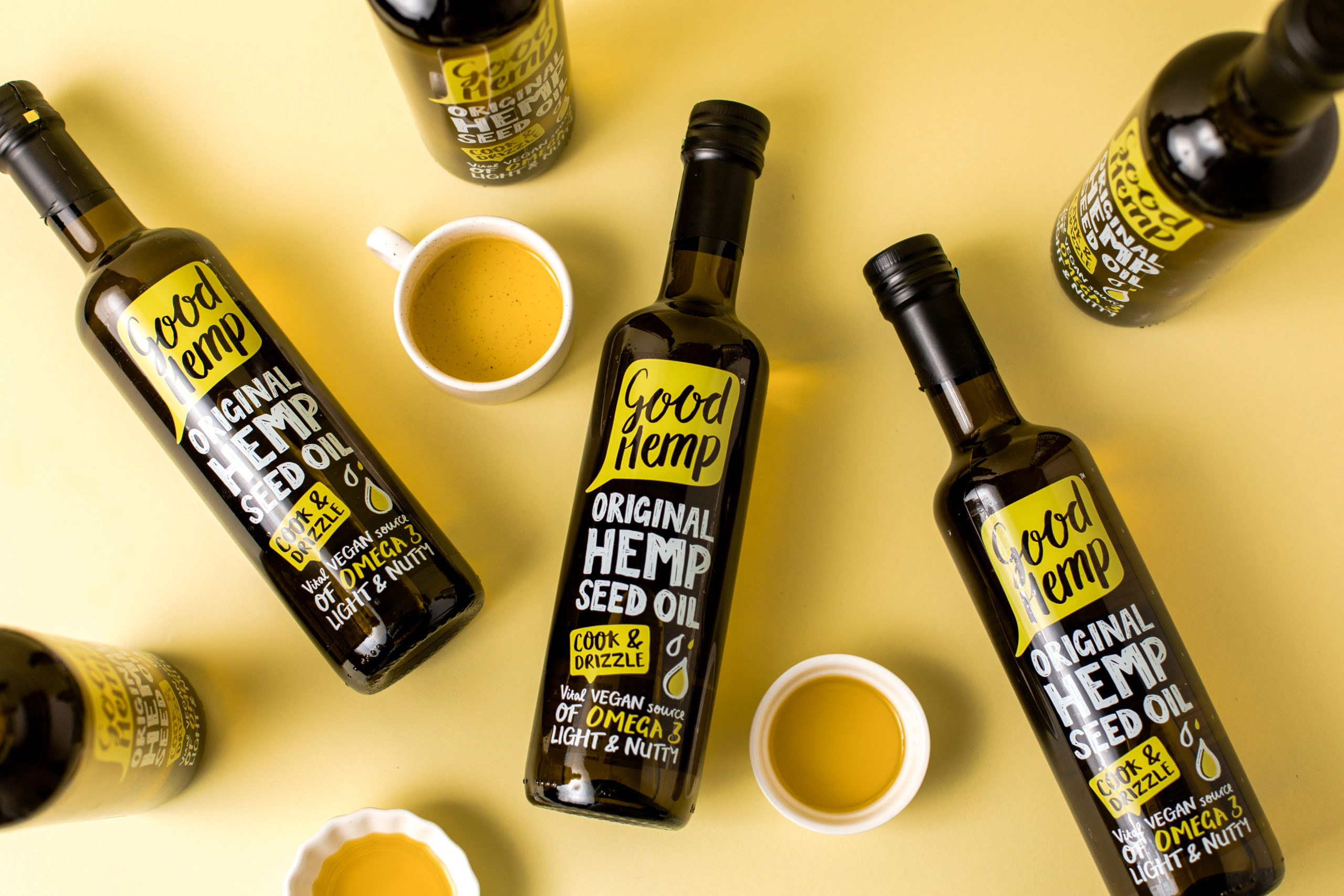 Both hemp seeds and flaxseeds are known for their hearty doses of protein, fibre and omega-3 fatty acids. As a result, it’s no wonder that hemp seed oil and flaxseed oil (also known as linseed oil) are both packed with similar natural goodness, and are a popular choice for kitchen cupboards around the world.

That being said, there are some important differences if you’re trying to decide between hemp seed oil or flaxseed oil. At Good Hemp, we personally think hemp oil is better, which might not be surprising, but we have the facts to back it up. Read on for a breakdown of our thoughts on the hemp oil vs flaxseed oil debate.

What Is Hemp Seed Oil?

Hemp seed oil is made from shelled hemp seeds – known as hemp hearts – which can easily be snacked upon for plenty of health benefits in their own right. Despite having its chemical make-up comprising almost 85% polyunsaturated fatty acids, it has long been considered one of the world’s healthiest oils – we’ll get into exactly why later.

Yet before people realised it was edible – and so good for you – it was used to make varnish and paints, until being replaced by petroleum-based products as their prices lowered. However, as with many of the modern uses of hemp, oil became far more sought-after, and a wee bit pricier as a result, once the laws around growing hemp changed.

Although both of them come from hemp, CBD oil and hemp seed oil are two completely different things, and come from different parts of the plant. While hemp seed oil is derived from cold-pressing hemp seeds, other parts of the hemp plant – principally the flowers and leaves, which are rich in CBD – are used for making CBD oil.

That said, the term “hemp oil” is sometimes used to describe all kinds of oil made from the hemp plant – including both CBD and hemp seed oil. However, since CBD itself doesn’t naturally exist in oil form, products like our range of pure CBD oil combine the compound with a carrier oil. Be warned though, some nefarious types will also market their CBD oil as “hemp oil” as a way of dodging restrictions on selling CBD. 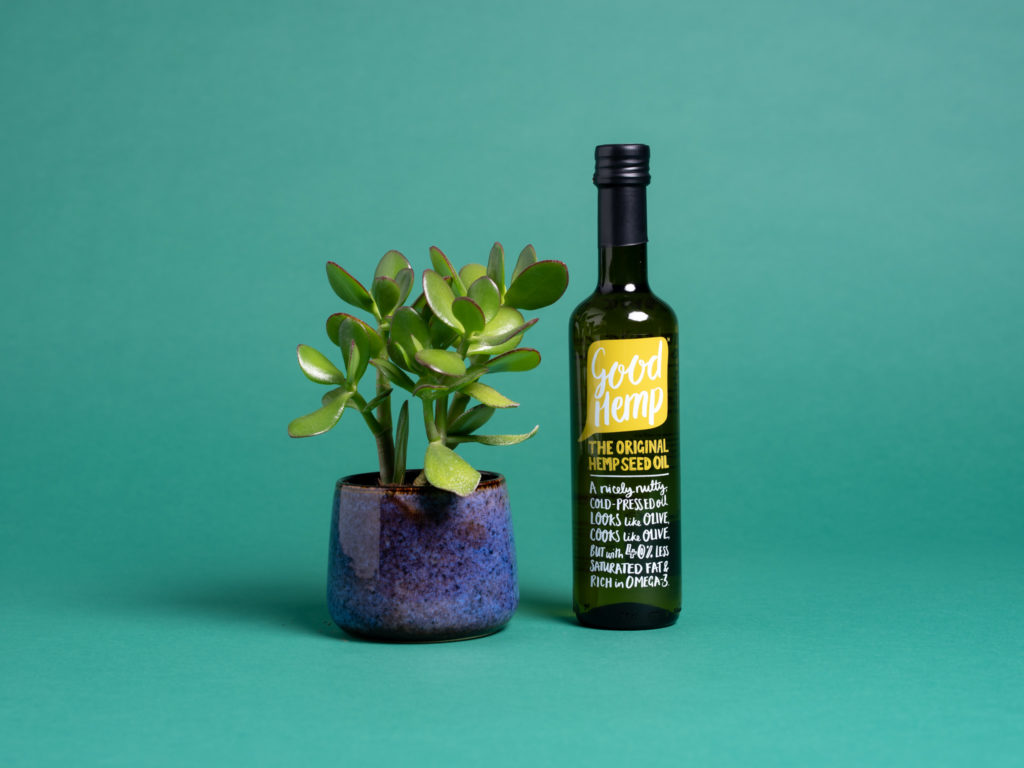 Let’s get this out of the way early – hemp is pretty damn good for you in whatever form you find it! Hemp oil, though, might be the healthiest form of the plant altogether. It’s naturally rich in omega-3, including omega-3 stearidonic acid (aka: SDA), which is an even more potent form of the fatty acid.

Among cooking oils, it also boasts one of the lowest amounts of saturated fat and the highest contents of polyunsaturated fats, which go towards reducing the amount of bad cholesterol in the bloodstream. But that’s not all! Hemp oil also contains the ideal ratio of omega-6 to omega-3. This balance of omegas is crucial to maintain optimum health, helping people to prevent a huge range of conditions, including cancers, diabetes and cardiovascular conditions.

Read on to discover even more about what makes hemp oil great.

OK, in the interest of full disclosure, let’s start off with one of the few things that might disappoint about using hemp oil to cook: you can’t really fry with it! At least, not for longer than half an hour or so. This is because, compared with other cooking oils, the smoke point of hemp oil is around 165°C. That means deep frying is out of the question, since all of its health benefits will fly out of the window as all of the good stuff is converted into trans fats, which you want to avoid.

But that’s not to say you can’t use hemp seed oil in the kitchen at all – far from it! In fact, hemp oil can be a perfect substitute for olive oil, but far greater health benefits. Why not check out our collection of easy hemp oil recipes and try for yourself?

Now you know a little more about cooking with hemp seed oil you might already be convinced about its delights, but here’s a secret – it doesn’t just belong in the kitchen! We’ve already explained how CBD can help your skin, but considering they come from the same source, you’ll be pleased to know that hemp seed oil has anti-inflammatory, hydrating properties which are just as effective, thanks to its balance of omega-3 and omega-6.

That also means that it can be pretty useful for keeping your hair looking its best too, since hemp seed oil contains a form of omega-6 called gamma linolenic acid (or GLA for short). Aside from hemp seed oil, it’s pretty difficult to find products which contain GLA, other than in evening primrose oil. However, there’s enough GLA found in hemp seed oil to promote healthy growth of skin, hair and nails. What’s not to love? 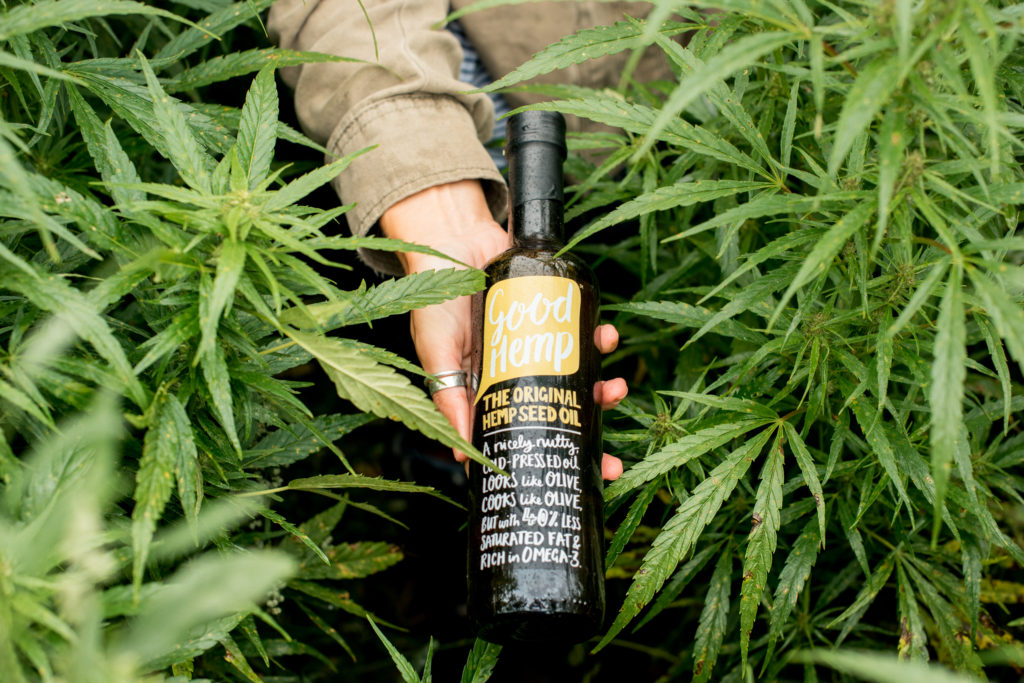 What Is Flaxseed Oil?

So, now that we’ve covered exactly why we think hemp seed oil is the bee’s knees, let’s move on to flaxseed oil. The Latin name of the flax plant literally translates as “very useful”, which gives it a high standard to live up to. And while flax was originally used in the manufacture of textiles, people soon found a use for its seeds in the production of oil, as well as being a snack in its own right. 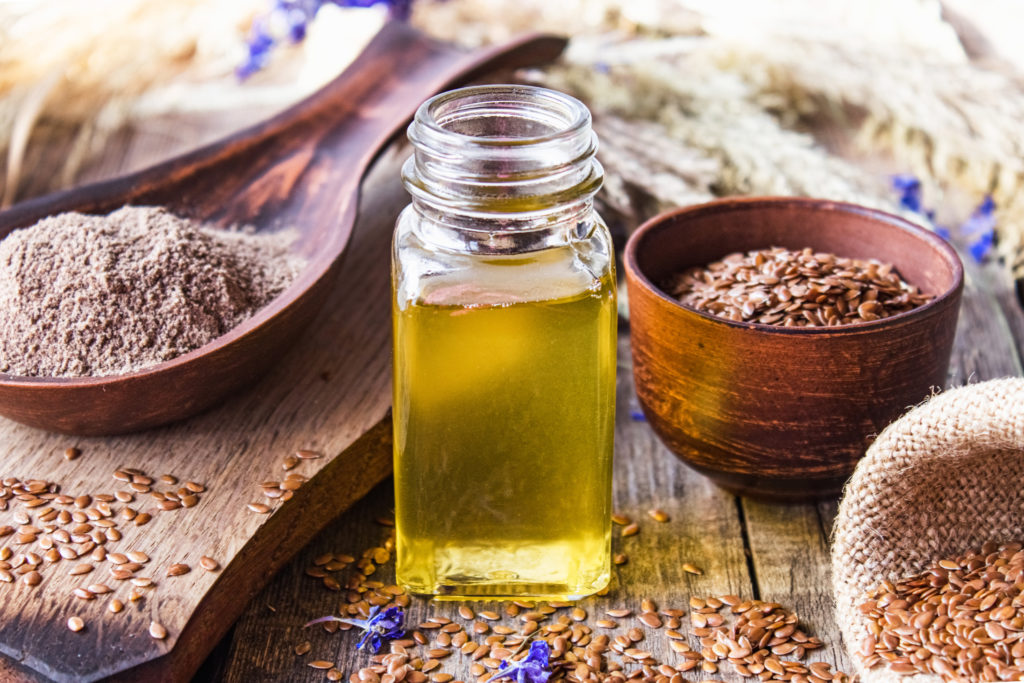 As with hemp seed oil, flaxseed oil is known as a great source of polyunsaturated fatty acids and omega-3 (in the form of alpha-linolenic acid, aka: ALA). It’s also gluten-free, and is high in both fibre and antioxidant properties.

While hemp seed oil has a medium smoke point (which means you can use it for gentle sautéing), flaxseed oil shouldn’t be heated at all. In fact, its smoke point is so low, heating flaxseed oil will actually create dangerous impurities that are actively harmful when consumed. However, it’s still a great addition to any dips or salad dressings, as well as a tasty way to add some extra nutritional kick to a smoothie.

Flaxseed Oil for Skin and Hair

Where flaxseed oil really comes into its own is in the beauty department. Loaded with vitamin E, it can help improve hair loss and reduce dandruff, while its omega-3 content means it can be applied topically as something of a skin conditioner. Modern science is also slowly starting to back up flaxseed oil’s centuries-old usage in complementary medicine, and offering conclusive proof that flaxseed oil can be used to soothe and improve sensitive skin.

On the face of it, you might think that flaxseed oil has the edge – after all, you’ll find a much greater level of omega-3 in flaxseed oil than in hemp seed oil. However, as we’ve discussed, hemp seed oil’s ideal ratio of omega-6 to omega-3 makes it an all-round healthier option.

What’s more, the omega-3 in flaxseed oil is also exclusively ALA, which is a short-chain fatty acid. That means most of that useful omega-3 ends up getting used as energy. By comparison, hemp seed oil contains both ALA and SDA, which increases its bioavailability and helps all of that good stuff get absorbed into your system more easily.

So while flaxseed oil has its uses, and we certainly wouldn’t discourage anyone who’s already a fan from leaving it well alone, we’d encourage you to give hemp seed oil a second look. With the science on our side, it’s hemp seed oil all the way as far as we’re concerned.