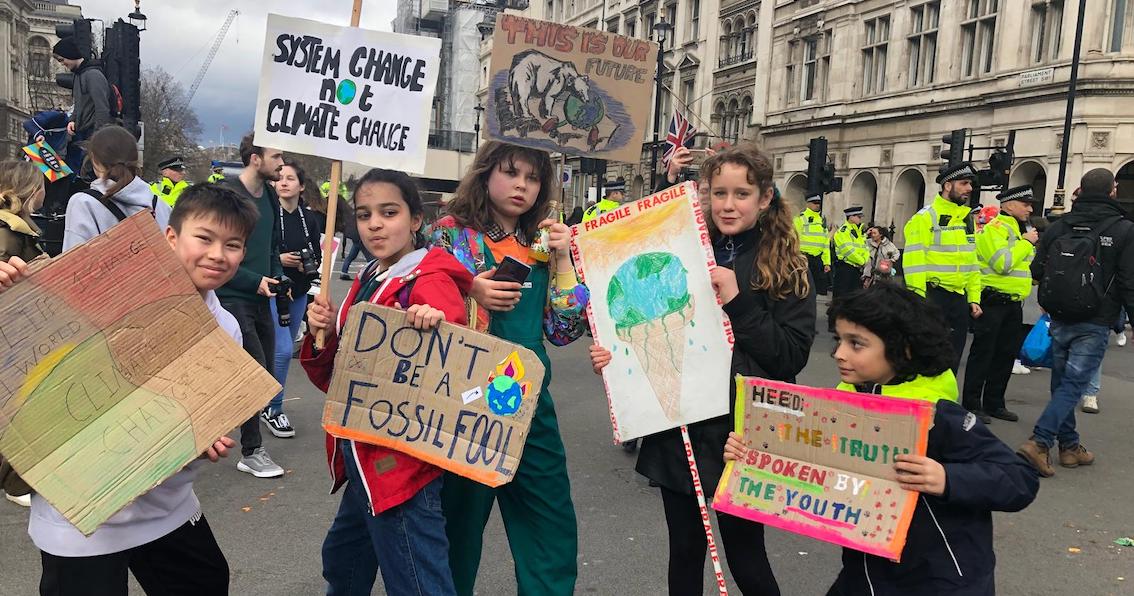 Greta Thunberg’s speech at the United Nations’ Climate Change conference really says it all: “The young people are starting to understand your betrayal. The eyes of all future generations are upon you. The world is waking up. And change is coming, whether you like it or not.”

The betrayal? Just the older generation fucking up the planet by doing things like ignoring environmental disaster and creating total political and social instability. Because sure, sometimes the old ones are the best (vinyl, Billie Holiday, a classic spag bol) but when it comes to past ways of thinking that perpetuate prejudice, sideline red flags about the impending doom of climate change or impact how future generations will be able to exist in the world to come – well, that’s where the young’uns are coming in to shake things up.

These are the kids who are realising that we can’t just blindly follow the whims of old white dudes who don’t know what’s up (Trump, BoJo…), and that we need to start thinking seriously about what the world will look like in 50 years time.

So let’s bring that big Greta energy into 2020. We’ve rounded up some resolutions inspired by young activists that might spur you to make a change.

Protest for something you believe in

Not that we necessarily advise getting arrested for voicing your beliefs (we see you Jane Fonda, and we salute you), but there is something about coming together around a cause you believe in that really gets the endorphins running. You might recognise former YouTube sensations Jack and Finn Harries from their vlogging days, but now the ardent environmental activists are more likely to appear on your screens protesting in Extinction Rebellion marches or debating the psychological impact of changing climates, or in Jack’s case, getting arrested at International Petroleum Week during a nonviolent protest. Using their platforms to inspire action and change on Instagram (combined they have almost 3 million followers), these twins are putting their money where their mouth is. Rather than just posting about saving the planet on their feed with #spon #ad brands selling things you don’t really need (just our humble opinion), they are on the ground taking a stand amongst thousands of others. So go join a protest and find friends to rally with you in a march – if it matters to you, take action. You can hop onto Extinction Rebellion’s website to find a weekly meeting in your area and for more upcoming events. (NB: we are not actively encouraging you to get arrested. But sometimes, them’s the breaks). 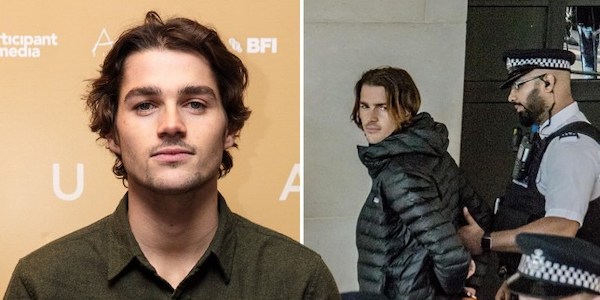 Educate yourself (and others) on that plant-based life

It’s an age-old millennial New Year’s resolution to start the year with Veganuary. Post-Christmas when we’ve all been stuffed with cheese, chocolate and wine, we feel the need to detox and reset. Admirable intentions, yes. But it should go beyond that. Educating yourself on why going plant-based might be better for your bod and the planet is a good place to start. Youth health activist Haile Thomas is – in the words of Michella Obama – “an example for all of you, what your little powerful voices can do to change the world.” And we all know when an Obama recommends, you take it seriously. Haile is the founder/CEO of the nonprofit HAPPY (Healthy Active Positive Purposeful Youth), which works to empower young people by offering nutrition and health education, particularly in at-risk communities in the United States. And no big deal, but she founded the company when she was 12 years old after her father was diagnosed with Type 2 diabetes. She’s all about that plant-based life, so how about learning more about how going veggie or vegan can help your health and maybe empowering others to do the same? We’re not talking about lecturing your dad every time he has a Sunday roast, but gently explaining why adapting your diet to be more plant-based might do some good for your health and the planet. 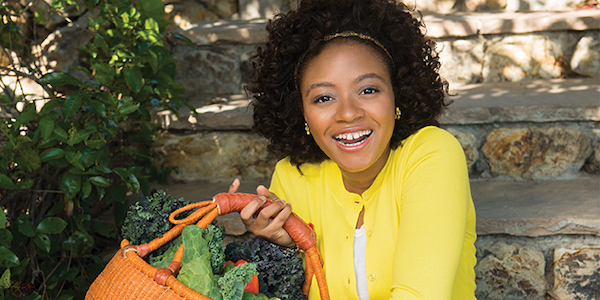 But if taking radical action is a little out of your comfort zone and you decide you want to take your activism in smaller bites – how about becoming a flexitarian? Of course we believe that veganism is the bees knees, but for many it’s a really difficult leap into the unknown. Young chef and food writer Izy Hossack has advocated her flexitarian diet for a while now (more appealing than going full cold turkey – excuse the pun), as it means you can start cutting down on meat and dairy gradually. A lot of Izy’s recipes are vegan anyway, but she doesn’t cut out meat completely, eating it once a month or so. How about cutting down your weekly consumption first, and begin to reduce from there? Try making meat a weekend treat and buying better quality, free-range and organic meat from your local butchers (less plastic packaging too!) and try to ask about where the meat has come from. Your Sunday roast could be a great place to start. 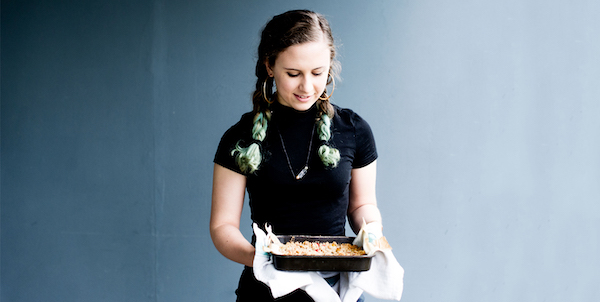 You’ve been saying for months you need to stop buying from high-street stores and investing in fast-fashion. That was approximately 72 items ago, and although you felt you really needed those rhinestone-emblazoned velvet slippers (sure, why not?) or identical white t-shirt to go with the other 17 you have, it’s time to take a stand. Take a leaf out of Tolmeia Gregory’s book, and start buying more consciously. The 19-year-old ethical fashion blogger is a major advocate for buying from sustainable brands, buying second hand, or simply reducing consumption (tell that to your rhinestone slippers). If you’re on the hunt for some new items but your wardrobe is already full to the brim, host a clothes swap with friends. Come armed with 10 items you want to give away, a bottle of wine (or Good Hemp CBD milk, depending on whether or not you’re doing dry Jan…) and browse everyone else’s stash. Aside from binning the fast-fashion mindset, remember that consuming consciously isn’t just for your wardrobe. Whether it’s what you’re using to wash your dishes, your clothes or clean your bathroom, be mindful of the products you’re using. Are they made from single-use plastic? What are the ingredients? What kind of company are the brands you buy from? 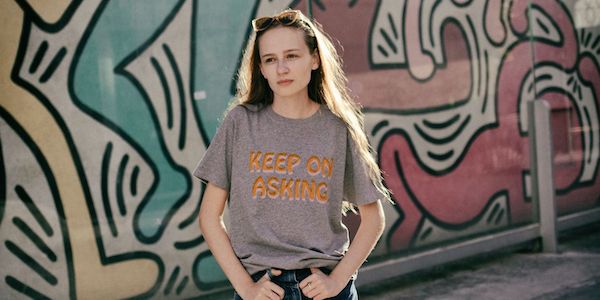 It’s official, all the cool kids are campaigning. Whether it’s sustainability (Extinction Rebellion), the housing crisis (Vicky Spratt) or legalising cannabis for terminal patients (End Our Pain), young folks are taking matters into their own hands and starting campaigns because they realise that using their voice will actually make a difference. Just like Edie Jones, the 19-year-old who campaigned for feminism to be put on the UK curriculum through her petition “A In Equality”. And if you’re thinking that petitions don’t make a difference, let’s put it into perspective: during the last parliament, 456 petitions got a response from the government and 73 of those petitions were debated in the House Of Commons. Sometimes when we think we don’t have a voice, we’re just not shouting loud enough. Whether you’re fighting for women’s rights, LGBTQ+ issues, equal pay, racial discrimination in the workplace, climate change or for supermarkets to reduce their plastic usage (yes please!), you can campaign in small or big ways. If you’re sick of using social media to spy on exes, how about using it to promote your petition instead or write about what you believe needs to be heard? 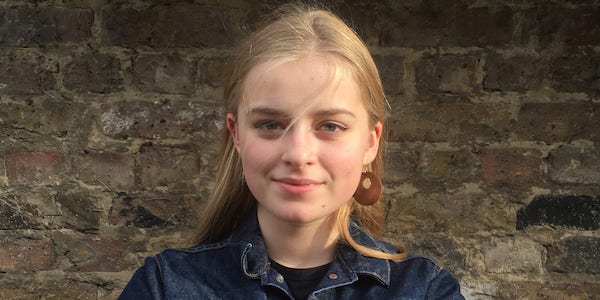