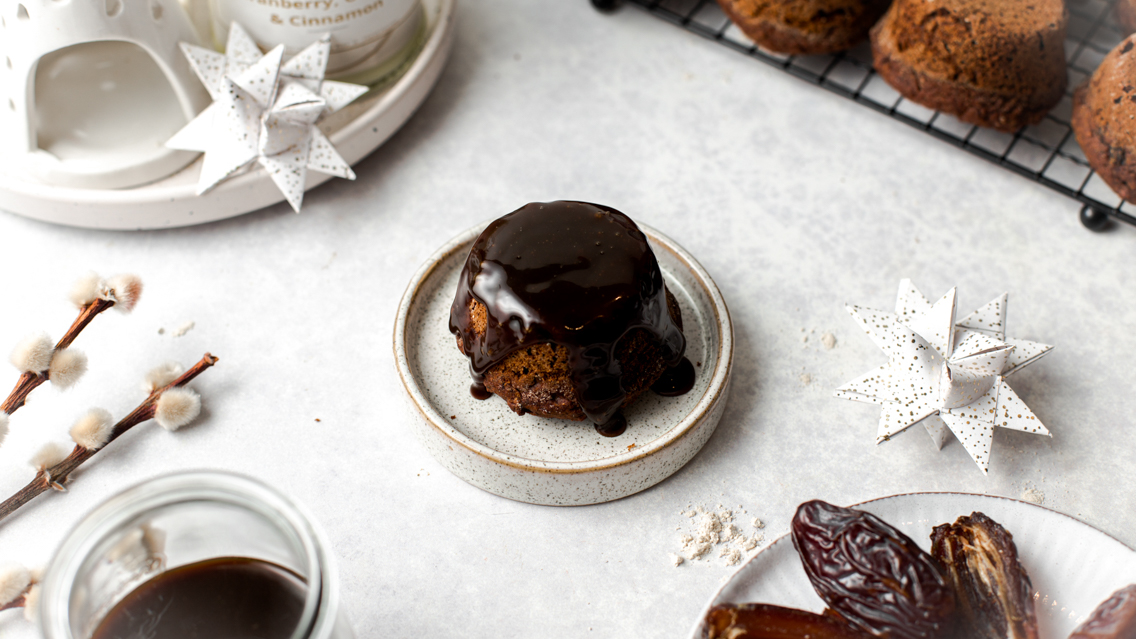 We would safely put a bet on the fact that there isn’t a person alive who doesn’t like sticky toffee pudding. It’s the perfect dinner party dessert as it looks like you’ve put loads of effort in, giving everyone their own individual pudding, however it’s actually super easy and can be made in advance of your guests arriving. We’ll be making this on new year’s eve for ourselves and the two other households we get to spend it with. Regardless of who you’ve picked to spend the festive period with, this is going to go down a winner.

One of the issues with this classic dessert is that it generally isn’t very vegan friendly – with egg in the pudding and lashing of cream in sauce. *Enter Tajda Ferko* otherwise known as My Vegan Minimalist, Tajda’s used our hemp milk and protein powder to make a healthier vegan version of the beloved sticky toffee pudding. This recipe makes 12 muffin sized puddings, however many people that serves is up to you. We’re not judging if you eat them all yourself.

Warm up your milk in a microwave and boil a kettle. Add the teabag to 125ml of boiled water and set aside. Put your dates in a medium bowl and pour over tea, hemp milk, and baking soda. Stir and set aside for 20 minutes to soften.

Make your flax eggs by adding 5 tbsp of boiling hot water to ground flaxseed. Stir well and again, set aside.

One the 20 minutes is up on your date mixture, remove the teabag and squeeze any excess liquid back into the bowl. Use the back of a fork to mash your dates until smooth. Here you can use a hand mixer for ease.

Add the date/tea mixture, lemon juice, and flaxseed egg to your butter mixture and whisk well. Next add all your dry ingredients, a third at a time. Gently fold in dry mixture over your wet ingredients and be careful not to over-mix!

Grease your muffin tins with dairy-free butter and dust with flour to prevent from sticking.

Spoon your mixture into muffin tin and bake at 170°C for 25-30 minutes. If you’re making in advance, ideally leave the puddings in the tin until you’re ready to serve and reheat for 5 minutes in the oven.

When you’re ready to serve your puddings, prepare your sauce by combining coconut milk, sugar, salt and black treacle in a saucepan. Whisk and bring to a simmer the sauce until it has thickened to your desired consistency. Then take the pan off the heat and whisk in dairy-free butter until combined.